Home » Social media: The new venue for service of process?

Social media: The new venue for service of process? 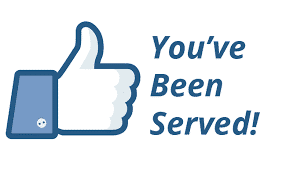 When you get that next Facebook or Twitter notification, could you have a summons waiting for you?

In recent years, courts have increasingly allowed service of process via social media, but with certain restrictions. More than a decade ago, process service over the internet came to the forefront when service was effectuated on a foreign party by email. A Ninth Circuit court determined that a “special method of service” could be used under the Federal Rules of Civil Procedure and the Hague Convention, as long as the party was given a reasonable opportunity to respond to the charges in the summons.

More recently, Facebook service of process has become a point of contention, with parties wishing to serve hard-to-find defendants and witnesses electronically. Twitter is second among social media platforms utilized to track down a party. Social media process service is complicated, though, because it is nearly impossible to guarantee the authenticity of a profile. Simply having a photo of the subject or some potentially identifying details isn’t enough, as nearly anyone can gather some photos and personal details and create a fake profile. Other evidence of the profile’s authenticity is required, such as age of the profile, quantity and history of posts, and direct communication with the subject.

In 2016, a Brooklyn judge denied a woman’s request to serve her estranged husband with a summons for divorce through Facebook, saying the woman failed to prove her husband was an active user of the platform.

Court papers show that Manal Qaza and Abdulla Saeed Hazza Alshalabi were married in New York in June 2011. Qaza said her husband left the area about two months after their marriage, failing to leave any forwarding contact information. Alshalabi, Qaza said, had been deported.

When Qaza filed for divorce in October 2016, she requested service of summons via Facebook, stating she had made numerous attempts to personally serve him. She said she had contacted family members and searched public records to no avail. Two Facebook profiles believed to belong to Alshalabi listed his location as Saudi Arabia. Because Saudi Arabia is not part of the Hague Convention, Qaza said she could not guarantee personal service in that country, and publishing the summons in a local newspaper would cost her $3,000, which she could not afford. She told the court she had previously corresponded with Alshalabi through one of his Facebook profiles.

In denying her petition for service through social media, New York Supreme Court Justice Jeffrey Sunshine said Qaza failed to submit documentation verifying that the submitted Facebook profiles were valid. One profile had no postings after 2014. Qaza also did not provide the court with screenshots of her reported messages with Alshalabi on Facebook, nor did she submit an affidavit verifying that she knew any of the friends listed on the profile.

Despite some courts allowing the use of email and social media for service of process, there still are very rigid rules in place regarding serving of parties in court cases. Personal service will always be the method preferred by courts. Torri’s Legal Services spends hours, if necessary, tracking down a party, effectuating quick, safe, accurate service. Contact us today with all your legal service of process questions!